How to address the impact of humans within an ecosystem? Nebula is a physical and immersive interactive installation exploring the notions of interdependence and inter-connections between humans and their environment.

The visitor discovers a room filled with light particles. The particles gently fly away as the visitor passes by, carried away by the fans activated as he approaches them. Like an element in a disturbed ecosystem, each particle gradually finds a new stability. Now, several visitors can roam through the space, changing the topography of the space even further. Once again, the machines blow to recreate a new balance. From the street, amused passers-by watch the white flakes fly away.

Our collective Lab212 was invited by Signal Film & Media to create a new installation.

Signal Film & Media is a charity organization dedicated to the democratization of filmmaking and digital arts. It is based in Barrow-in-Furness, in the north-west of the UK.

Signal Film & Media’s interest in our work lay in its stunning and innovative aesthetics, while remaining accessible and stimulating for an audience unfamiliar with digital and interactive art.

The theme of the annual exhibition programme was “Under the same sky”, and aimed to investigate the connections and interactions between humans and their environment, questioning the way all things connect and interact with each other.

Béatrice Lartigue and I went to Barrow-in-Furness during a mini-residency in that coastal region north of England, near the Scotland border.

We were able to measure the impact of industrial and human activities on the environment and on the daily life of the inhabitants – in terms of employment and the economy, but also in terms of prospects and horizons: industry is literally at the heart of people’ lives in Barrow (hangars appear here and there in the landscape), it produces a certain sense of unreality.

The main historic industry in this town is arms factory. Yesterday muskets, today nuclear submarines. What might have been the impact of this city on the course of history, how does the daily life of its inhabitants relate to the world course?

There is one of the largest offshore wind farms in the world. Once again, global events (the winds) have a local impact (electricity production).

Our interpretation of the theme ” inter-connectivity ” focused on systems theory, cybernetics and homeostasis.

We are interested in the systemic in its way of approaching any problem as a set of elements in mutual relations. Cybernetics introduces the notion of feedback as a central element governing systems, whether biological or technical. Feedback occurs when the outputs of a system are redirected as inputs to that system, as part of a chain of cause and effect forming a loop.

Homeostasis is one of the principles used by cybernetics, which defines the ability of a system to maintain the balance of its internal environment, regardless of external constraints.

We wanted to look at the connection to the landscape. Particularly the duality between artificial and natural landscapes, and how human imprints are shaped, and in turn shape the lines of the landscape. This balance and fragility was of interest to us: how human takes its place within an ecosystem, what impacts arise from this, and finally how the ecosystem tends to find a new equilibrium in a process in perpetual motion.

Dozens of different types of particles were tested, and several detection methods were experimented. The production of the components required for the exhibition was made in France, while equipment (fans and confetti) was delivered on site.

Each fan is equipped with a motion sensor, a confetti sensor and a control box. Each box is autonomous, and precise time delay for triggering are controlled by an Arduino.

We held two workshops following the opening of Nebula. One was aimed at a high school and college audience, the other at an adult audience.

These workshops are designed to explore the expressive potential of light sensors, sound sensors, motion sensors, etc. associated with everyday objects. After having experimented together the functionality of the sensors, each participant can choose one of them. He can then associate it with an electrical object (provided or brought by the participant) such as a fan, lamp, audio speaker, etc… Connected to the sensor, the object switches on and off according to light, sound or movement.

Bringing together science and technology through art, the commission will immerse you in a quietly changing landscape, where your own interactions will influence how the piece evolves.

Everything becomes inter-relational and transformative; we are all part of a commonality of atoms that constitutes the universe, merging and transmuting like molecules or matter in a nebula. 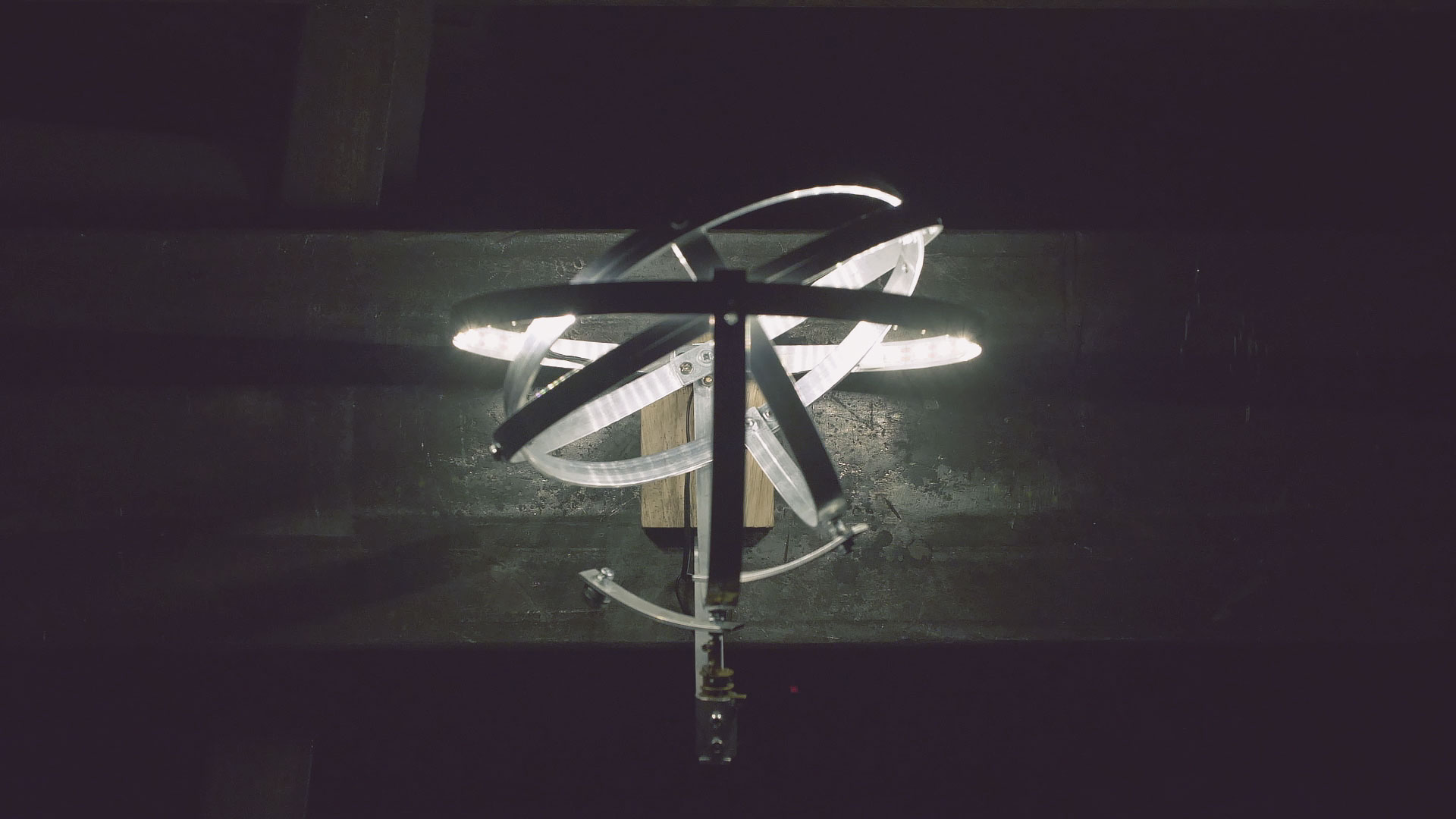 16 interactive machines from an imaginary laboratory on the theme of lightness. 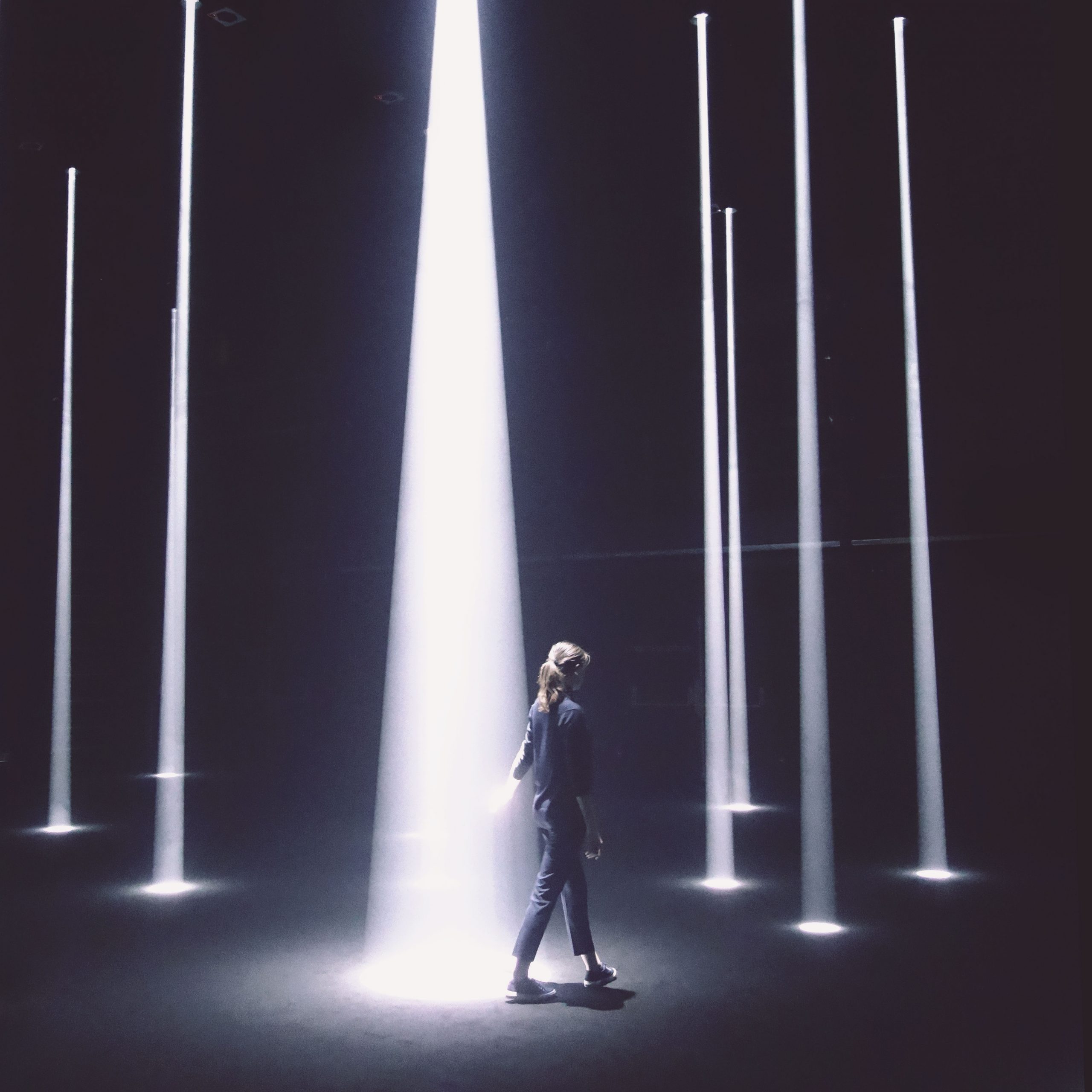